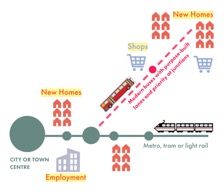 You may have seen the recent BBC report on garden villages and their risk of becoming car-dependent commuter estates. This coincided with the launch of Transport for New Homes report titled Garden Villages and Garden Towns: Visions and Reality on the 16th June.

Before commenting on the report, it is important to note just how influential the research panel behind it actually is. The panel is an impressive ‘who’s who’ of the transport and town planning industry’s finest talent. Lynda Addison, is one member of this panel who has worked for decades at a national and local level supporting central government and local authorities to improve planning and transport services. Stephen Joseph, former chief executive of Campaign for Better Transport and now a trustee of the influential Foundation for Integrated Transport join other panellists from the RAC Foundation, Network Rail and CPRE. This group really do know what they are talking about and should be listened to by the government and local authorities up and down the country!

The report examines in detail the plans for 20 garden communities across the country, as well as the funding and policy landscape behind them. It found that – in their current form – they will generate high levels of traffic by condemning their residents to car-dependent lifestyles.

Its damning findings concluded that most are planned in the wrong locations, far from town centres and rail stations. They lack local facilities and their streets are designed around car use. Funding for walking, cycling and public transport is missing. The 20 garden communities they looked at alone would create up to 200,000 car-dependent households with non-driving residents having to walk up to seven miles to access the nearest town centre or railway station.

The report chimed with everything we have been saying about Maidstone Borough Council (MBC)’s proposals for a garden community at Lenham Heath. Sticking a dormitory town of some 5,000 homes and 10,000 residents in the middle of the countryside, furthest away from the nearest urban conurbations does not promote sustainable lifestyles and almost certainly will create more traffic and more pollution. Residents will have to commute to Maidstone or Ashford to the nearest employment, leisure and shopping amenities. Cars will be favoured over low-frequency train and bus services. Walking and cycling will be out of the question.

It’s quite simple. New homes have got to be within walking or cycling distance of the nearest employment, services and amenities. Alternatively, homeowners need to be able to walk or cycle to high-quality, frequent, and fast public transport links taking them to places they actually need or want to go. This is what we believe Maidstone’s spatial planning approach should adopt when they consult on it later this year.

The report concludes that fundamental changes need to happen to ensure new homes are built in the right places. It highlights that an appropriate location is essential. It calls on the government to launch an urgent review of all existing garden villages and towns in terms of funded sustainable transport in light of the government’s legal duty to lead us to net-zero carbon and to build around active and less isolated lifestyles for the future.

MBC’s proposed development at Lenham Heath falls into nearly every pitfall highlighted in this report. Trying to ‘unlock’ a development site through building a new motorway junction is not acceptable in 2020. We strongly urge local councillors, planners and decision-makers to take note of the findings of this report and act upon it as part of Maidstone’s Local Plan Review.