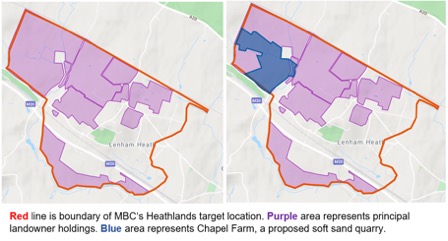 Maidstone Borough Council’s revised master plan for its garden community at Lenham Heath still fails to address key issues and raises more questions than it answers, according to Save our Heath Lands action group (SOHL)

A SOHL spokesperson said; “Maidstone Council has chosen one of the most complicated sites possible for their proposed new garden town, and we now learn that a parcel of land officers have earmarked for development is now included in  Kent County Council’s Minerals Plan for use as a new quarry to provide soft sand to the construction industry for the next 20 to 30 years. Interestingly, officers have failed to include this vital piece of information in their initial reports to councillors and the public.”

Last week, the council’s Strategic Planning and Infrastructure Committee learnt that officials had whittled down the list of proposed garden communities from nine to four with no evidence published to show how they had reached their conclusions.

A SOHL spokesperson said; “clearly a lot of work has taken place and we are only being given snippets of information without seeing the full picture. We renew our plea again for greater transparency so Maidstone’s residents can see how their council are making decisions.

“The council’s revised masterplan for the Lenham Heath proposal still lacks any detail about how the scheme can be sustainable. Local employment opportunities are very limited and residents will be forced to get into their cars to travel to work and services outside the area, resulting in even more congestion on the local roads.  The A20 is very close to capacity and would require substantial improvements to accommodate the additional traffic. The inclusion of a new motorway junction in the scheme is also unrealistic, and we don’t even know whether any meaningful conversations have been held between the council and Highways England.  All these factors mean that the council’s garden community will become little more than a car dependent dormitory town and ignores all the key principles set out by the Government for garden communities.

“While other local parish and borough councils in Kent are positively embracing the preservation of our green spaces within their local plans, Maidstone Borough Council seems hell-bent on wasting precious countryside by building low-density sprawling commuter estates almost entirely reliant on the use of a car.

“With uncertain economic times ahead in the wake of the pandemic, it is likely to affect borrowing, employment, income and the housing market. We would then question Maidstone Borough Council’s logic in ploughing further taxpayers’ money into this scheme.”